Ecosystem-based management (EBM) of forests is gaining acceptance for its focus on the maintenance of the long-term integrity of ecosystem processes, but climate change challenges this view because of its impacts on these very processes. We have therefore evaluated the robustness of EBM to projected climate change, considering the role of climate on forest growth and fire regime in a boreal forest of eastern Canada. A climate sensitive growth index model was calibrated for three commercial species and used to project the evolution of merchantable volume for two climate scenarios (B1 and A2) under conventional and EBM strategies. Current burn rate and burn rates under future climate scenarios were also considered. Under the most extreme projected climate scenario, the periodic timber supply could be reduced by up to 79% through direct (growth reduction) and indirect (fire) effects. However, ecological indicators show that EBM is a more robust forest management strategy than conventional one demonstrating its adaptation potential to climate change at least in the short term.

Regardless of the forest management scenario, the timber supply could be reduced by up to 79% in the worst climate scenario. This decrease combines growth reductions and losses caused by fires.

However, ecological indicators show that ecosystem management opens the way to greater potential for adaptation to climate change, at least in the short term, than traditional forest management. 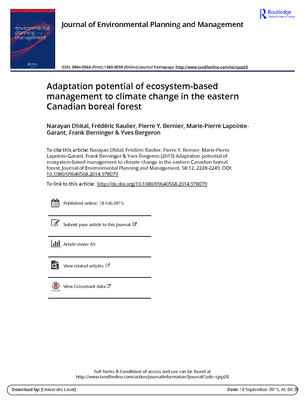