Background Although somatic embryogenesis has an unprecedented potential for large-scale clonal propagation of conifers, the ability to efficiently induce the embryonal cultures required for somatic embryo production has long been a challenge. Furthermore, because early stage zygotic embryos remain the only responsive explants for pines, it is not possible to clone individual trees from vegetative explants at a commercial scale. This is of particular interest for adult trees because many elite characteristics only become apparent following sexual maturation. Findings Shoot explants collected from adult radiata pine trees were cultured on four induction media differing in plant growth regulator composition, either directly after collection or from in vitro-generated axillary shoots. Six callus lines were selected for microscopic examination, which failed to reveal any embryonal masses (EM). qPCR expression profiling of five of these lines indicated that explant type influenced the absolute level of gene expression, but not the type of genes that were expressed. The analysis, which also included three EM lines induced from immature zygotic embryos, encompassed five categories of genes reflective of metabolic, mitotic and meristematic activity, along with putative markers of embryogenicity. Culture medium was found to have no significant impact on gene expression, although differences specific to the explant’s origin were apparent. Expression of transcriptional factors associated with vegetative meristems further suggested that all of the callus lines possessed a substantive vegetative character. Most notable, however, was that they all also expressed a putative embryogenic marker (LEC1). Conclusions While limited in scope, these results illustrate the utility of expression profiling for characterizing tissues in culture. For example, although the biological significance of LEC1 expression is unclear, it does present the possibility that these callus lines possess some level of embryogenic character. Additionally, expression of vegetative meristem markers is consistent with their vegetative origin, as are differences in expression patterns as compared with EM.

In this study, the researchers identified elements in the cells of Monterey pine trees that have a potential for somatic embryogenesis. 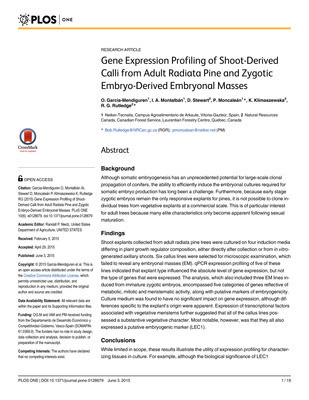