In 2009 unusual white pine needle discoloration was observed in eastern Canada and northeastern USA. While the symptoms were similar in most pine stands, the disease was diagnosed as Canavirgella banfieldii in several locations and Dooks needle blight caused by Lophophacidium dooksii in others. Because of the similarities in symptom development and morphological characters of the causal agents, it was suspected that C. banfieldii and L. dooksii are either the same or closely related species. To test this hypothesis we examined several collections representing C. banfieldii and L. dooksii, including the two type specimens. Phylogenetic analyses of nuc internal transcribed spacer rDNA sequences confirm the synonymy of C. banfieldii with the earlier described L. dooksii and provide the first evidence of the close evolutionary relationship of L. dooksii to other pine pathogens.

The researchers identified the cause of white pine browning, which occurred throughout eastern Canada in 2009 and 2010: the cause was the fungus Lophophacidium dooksii. Basing their research on morphology and gene sequencing, the researchers also demonstrated that this fungus and the American species Canavirgella banfieldii, previously identified as the cause, are in fact the same species. This fungus causes a disease that discolours two-year-old needles of white pine without killing the tree.

Lophophacidium dooksii was described in Canada for the first time in the 1980s. This study shows that the fungus is present throughout eastern North America. There are at least two other pathogenic fungi that cause similar symptoms. 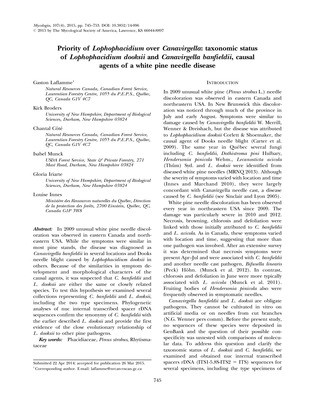