In forest ecosystems, earthworms and wildfire are two ecological agents that cause carbon (C) stored in the forest floor to be transferred to the atmosphere as greenhouse gases, either through heterotrophic respiration (earthworms) or through periodical combustion (wildfire). For centuries, wildfire has been an important ecological driver in the boreal forests of Canada where most fire emissions to the atmosphere originate from the forest floor. In contrast, earthworms are recent invaders, having been introduced to the Canadian boreal during the 20th century. Their spread is mainly associated with anthropogenic activities. We examined stand-level effects of earthworms and wildfire on forest floor C by adapting an earthworm-C simulation model for the boreal and using it in combination with a forest C accounting model. Because the overall impact of an invasive species depends on its areal extent, we used a spatial model of earthworm spread to calculate the total predicted change in C storage at the landscape-level following earthworm invasions in northeastern Alberta. Depending on the ecological groups of earthworms modelled in stand-level simulations, the forest floor C stock was reduced by 49.7–94.3% after 125 years, although the majority of this reduction occurred 35–40 years after initiation of the invasion. Because earthworm activities reduced the amount of forest floor C available for burning, emissions from wildfire were lower in the presence of earthworms. Spatial modelling of earthworm effects within the 5,905,400 ha Alberta–Pacific Forestry Management Area projected that forest floor C stocks in the invaded stands decreased 50,875 Mg C by 2006, and 2,706,354 Mg C by 2056, compared with the same area if earthworms were not present. Loss of forest floor C averaged over the 50 year simulation was 10 g m2 yr–1; similar in magnitude to estimates for C loss in the Canadian boreal due to wildfire or harvesting. These results indicate effects of non-native earthworms on the forest floor should be included in predictions of forest ecosystem C budgets to ensure accurate attribution of emissions to heterotrophic respiration versus combustion.

In forests, earthworms and wildfire are two factors that can release carbon (C) stored in dead and decomposed wood and leaves on the forest floor to the atmosphere as greenhouse gases (GHG). Earthworms are recent invaders, brought to forests in the 20th century and spread by human activities. We wanted to determine the contributions of wildfire and earthworms to C loss. We combined three computer models to predict the effect of earthworm invasion and spread over an area of 6 million ha in northeastern Alberta, from 2006 to 2056. The models project that in 40 years the amount of C in the forest floor would be reduced by 50 to 94 percent at the scale of a forest site, and in 50 years 2.7 million Mg C would be lost from the forest floor because of the presence of earthworms. We conclude that invasive earthworms could lead to GHG emissions from boreal forests on a scale similar to that of wildfire and harvesting. These results indicate the importance of including effects of invasive earthworms on forest C budgets to accurately estimate GHG emissions. 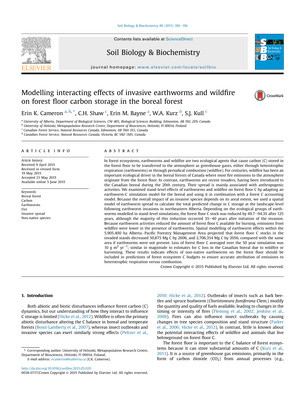