Imagine an insect pest arriving in an area where there is an unlimited food supply, without being seen or bothered. This is the kind of dream life the emerald ash borer is leading in North America. This insect attacks healthy ash trees, causing damage that can lead to tree mortality within a few years. The emerald ash borer has already killed several millions of ash trees since it was first discovered on this continent in 2002. You can play a role in detecting the presence of the emerald ash borer and halting its spread by learning about the risks associated with the movement of firewood. By educating ourselves about this exotic insect, we can all do our part to protect Canada’s ash trees.

This publication provides essential information on the emerald ash borer and on the methods being considered to control this pest.

Canadian Forest Service researchers are currently testing an emerald ash borer detection method that uses a synthetic version of the female pheromone. This pheromone, combined with traps, could make it easier to catch the insect and limit its mating probability.

Originating from Asia, the emerald ash borer turned up in Canada in 2002. This insect has few natural enemies in Canada and is a threat to the economy and the environment in forested and urban areas.

Branching Out is a series of plain language scientific and technical fact sheets describing research work conducted at the Laurentian Forestry Centre. It is intended for a specialized audience.

Also available under the title:
Emerald ash borer: What do you know about it? Branching out from the Canadian Forest Service, Laurentian Forestry Centre. No. 97. (English) 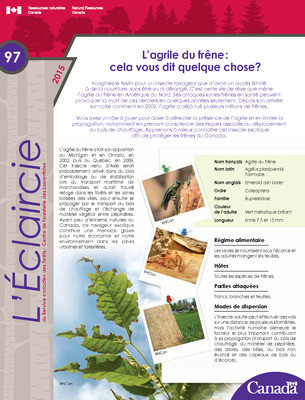