White pine blister rust is caused by the fungal pathogen Cronartium ribicola J.C. Fisch (Basidiomycota, Pucciniales). This invasive alien pathogen was introduced into North America at the beginning of the 20th century on pine seedlings imported from Europe and has caused serious economic and ecological impacts. In this study, we applied a population and landscape genetics approach to understand the patterns of introduction and colonization as well as population structure and migration of C. ribicola. We characterized 1,292 samples of C. ribicola from 66 geographic locations in North America using single nucleotide polymorphisms (SNPs) and evaluated the effect of landscape features, host distribution, and colonization history on the structure of these pathogen populations. We identified eastern and western genetic populations in North America that are strongly differentiated. Genetic diversity is two to five times higher in eastern populations than in western ones, which can be explained by the repeated accidental introductions of the pathogen into northeastern North America compared with a single documented introduction into western North America. These distinct genetic populations are maintained by a barrier to gene flow that corresponds to a region where host connectivity is interrupted. Furthermore, additional cryptic spatial differentiation was identified in western populations. This differentiation corresponds to landscape features, such as mountain ranges, and also to host connectivity. We also detected genetic differentiation between the pathogen populations in natural stands and plantations, an indication that anthropogenic movement of this pathogen still takes place. These results highlight the importance of monitoring this invasive alien tree pathogen to prevent admixture of eastern and western populations where different pathogen races occur.

This study demonstrates the importance of monitoring white pine blister rust and testing seedlings to be transplanted in order to prevent interactions between the two populations of this rust found in Canada. These interactions could cause an increase in the genetic diversity of the pathogen, thus giving it greater potential to adapt to the host’s defense mechanisms.

In Canada, there are currently two genetically distinct populations of white pine blister rust, i.e. Eastern and Western white pine blister rust. The specific objective of this study was to genetically characterize these two populations. This study made it possible to assess the effect of landscape, host distribution (all five-needle pine species), climate and colonization history on the population structure of this pathogen.

The results showed that a natural barrier brought about by discontinuity in white pine populations separates the eastern and western populations of this pathogen. However, the researchers detected a certain degree of mixing between the two populations, which demonstrates the pathogen’s potential to cross this barrier, possibly aided by human activities (e.g. displacement of infected white pines).

The causal pathogen of white pine blister rust was introduced into North America in the early 20th century on white pine seedlings imported from Europe. This disease causes the death of white pine. 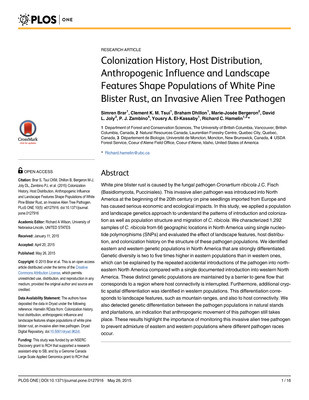