To determine the impact of white pine blister rust (WPBR) following the recent breakdown of the Cr resistance dominant gene in Ribes, 255 plants of 19 Ribes cultivars and 445 neighboring eastern white pines (Pinus strobus) from 42 sites across New Hampshire were evaluated. Of the 19 cultivars evaluated, 15 were WPBR resistant, and four of these were labeled as black currants (R. nigrum) with the Cr gene (Cr Ribes cultivars). Incidence of WPBR ranged from 0% to 88% for WPBR resistant Ribes cultivars. Mean WPBR severity was 14% and < 6% of leaf area for Cr Ribes and partially resistant cultivars, respectively. The presence of C. ribicola was confirmed on 17 of the 19 Ribes cultivars screened with PCR analysis and DNA sequencing. Reference accessions of Cr Ribes cultivars from the Canadian Clonal Genebank were successfully infected with C. ribicola inoculum collected in New Hampshire from Cr Ribes cultivars and P. strobus confirming that the vCr race of the pathogen that has defeated the Cr dominant gene in cultivated Ribes is present in New Hampshire. The probability of finding pines with WPBR was greater for pines neighboring infected black currants with the Cr gene (0.18) than pines neighboring WPBR-free Ribes (0.02). Results from this study suggest that the breakdown of Cr-based resistance in Ribes poses a threat to the white pine resource and to cultivated Ribes production.

The researchers also succeeded in infecting Ribes cultivars from the Canadian Clonal Genebank that had previously characterized as being immune to this disease. They did so by using samples of a new race of rust collected in New Hampshire. This confirms that the new race of rust, which overcame the resistance of the resistant Ribes cultivars, is present in New Hampshire. 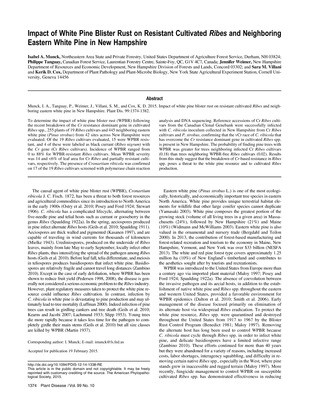