Farnesyl diphosphate synthase (FPPS) catalyzes the condensation of the non-allylic diphosphate, isopentenyl diphosphate (IPP; C5), with the allylic diphosphate primer dimethylallyl diphosphate (DMAPP; C5) to generate the C15 prenyl chain (FPP) used for protein prenylation as well as sterol and terpene biosynthesis. Here, we designed and prepared a series of pyridinium bisphosphonate (PyrBP) compounds, with the aim of selectively inhibiting FPPS of the lepidopteran insect order. FPPSs of Drosophila melanogaster and the spruce budworm, Choristoneura fumiferana, were inhibited by several PyrBPs, and as hypothesized, larger bisphosphonates were more selective for the lepidopteran protein and completely inactive towards dipteran and vertebrate FPPSs. Cell growth of a D. melanogaster cell line was adversely affected by exposure to PyrPBs that were strongly inhibitory to insect FPPS, although their effect was less pronounced than that observed upon exposure to the electron transport disrupter, chlorfenapyr. To assess the impact of PyrBPs on lepidopteran insect growth and development, we performed feeding and topical studies, using the tobacco hornworm, Manduca sexta, as our insect model. The free acid form of a PyrBP and a known bisphosphonate inhibitor of vertebrate FPPS, alendronate, had little to no effect on larval M. sexta; however, the topical application of more lipophilic ester PyrBPs caused decreased growth, incomplete larval molting, cuticle darkening at the site of application, and for those insects that survived, the formation of larval-pupal hybrids. To gain a better understanding of the structural differences that produce selective lepidopteran FPPS inhibition, homology models of C. fumiferana and D. melanogaster FPPS (C_f_FPPS2, and D_m_FPPS) were prepared. Docking of substrates and PyrBPs demonstrates that differences at the -3 and -4 positions relative to the first aspartate rich motif (FARM) are important factors in the ability of the lepidopteran enzyme to produce homologous isoprenoid structure and to be selectively inhibited by larger PyrBPs.

In this study, the researchers measured the effect of enzyme inhibitors on the activity of an enzyme that is essential to spruce budworm development. Some derivatives of the substances used specifically inhibited this budworm enzyme, thus making it possible to consider their use as selective pest control products. During in vivo tests performed on larvae, the derivatives decreased growth or completely inhibited larval development. 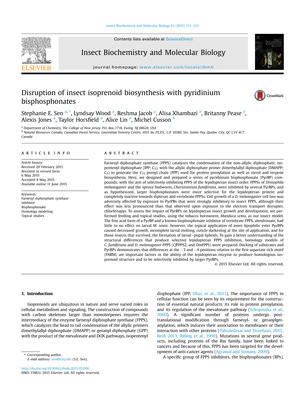