Disturbance plays an important role in the distributional range of species by affecting their colonization potential and persistence. Short disturbance intervals have been linked to reduced seedbank sizes of some species, but the effects of long intervals are largely unknown. To explore the potential existence of seedbank sizes that may also be limited by long disturbance intervals, we studied an area in boreal eastern North America where time since fire (TSF) coincides with an increase in environmental stress (accumulating organic matter measured as depth of the soil organic layer (SOL)). Along a chronosequence dating back about 710 years, we counted the number of seeds cone-1 of black spruce (Picea mariana) and then estimated the number of seeds tree-1 and site-1 by upscaling. Younger sites [TSF 60–150 years] with mature first regeneration trees had average-sized seedbanks for black spruce [12.0–17.9 (105) seeds ha-1], whereas subsequent pulse trees that established in SOL depths greater than 35 cm showed highly reduced seed numbers. Sites with second- to fourth-regeneration pulse individuals [TSF c. 350–710 years] had exceptionally small seedbanks of 0.90 (105) and 0.46 (105) seeds ha-1, respectively. Radial tree growth rate showed a similarly negative response to SOL depth and could potentially be used as an indicator of seed output in plant species. Because the decline in seedbank size was possibly caused by more general environmental stress factors such as reduced nutrient availability, we suggest exploring whether other examples of ecosystems exist where long time since disturbance may lead to reduced seedbank sizes.

For the boreal forests of northeastern North America, the researchers demonstrated that the longer the interval between two fires, the greater the amount of organic matter accumulating on the ground, which creates stress for trees and reduces their growth and the number of stored seeds. 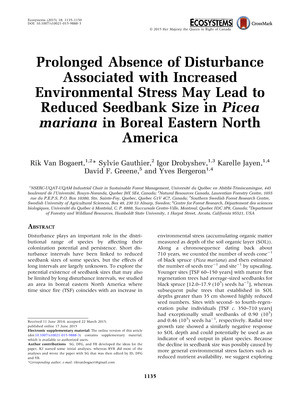