Carbon (C) content in several forest ecosystem pools, including trees, understory species, downed logs, litter, soil organic and mineral layers, and fine roots, and tree growth were compared in balsam fir (Abies balsamea) and black spruce (Picea mariana) ecosystems located along a climatic gradient in eastern Canada spanning regions that differed by 4 °C in mean annual temperature. A total of 19 experimental sites were established, 12 in balsam fir ecosystems and 7 in black spruce ecosystems. Diameter at breast height (dbh), height growth rate, and C contents in trees, understory species, downed logs, litter, and soil organic and mineral layers did not differ significantly between northern and southern experimental sites (P < 0.05). The only C pool that differed significantly among the regions was fine roots. Tree ring data collected on trees greater than 5 cm in dbh at all the sites were related to monthly climatic data between April and October, the active physiological season at the latitudes of the study. The relationships derived indicated that the differential effects of significant climatic variables along the climatic gradient were more important for black spruce than balsam fir. These results suggest that the changes in climatic conditions in the next 100 y may have a relatively small effect on the productivity and C allocation of both forest types when located within a range of climatic conditions similar to those of this study.

The findings of this study demonstrate that average annual temperature has little effect on carbon allocation in balsam fir and black spruce ecosystems located within similar boundaries of climate conditions.

The objective of this research work was to examine the degree to which carbon content in balsam fir and black spruce ecosystems could differ along a climatic gradient of about 4°C in eastern Canada.

The researchers did not find significant variations in the carbon content of trees, understory species, dead stems, litter, and soil of the experimental sites. Only the carbon pool of fine roots showed significant variations between the experimental sites. The boreal forest ecosystem has a considerable influence on the overall carbon cycle. Nearly 25% of the Earth’s carbon is contained in boreal forest ecosystems. Balsam fir and black spruce are the two dominant species in these ecosystems. 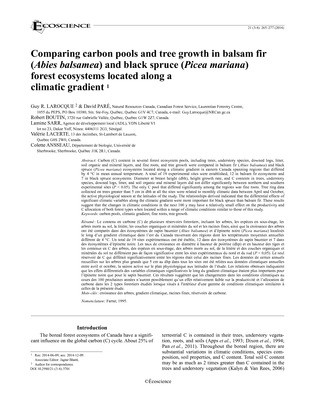