The boreal forest, one of the largest biomes on Earth, provides ecosystem services that benefit society at levels ranging from local to global. Currently, about two-thirds of the area covered by this biome is under some form of management, mostly for wood production. Services such as climate regulation are also provided by both the unmanaged and managed boreal forests. Although most of the boreal forests have retained the resilience to cope with current disturbances, projected environmental changes of unprecedented speed and amplitude pose a substantial threat to their health. Management options to reduce these threats are available and could be implemented, but economic incentives and a greater focus on the boreal biome in international fora are needed to support further adaptation and mitigation actions.

It is predicted that up until 2100, climate change combined with changes in land use will occur more rapidly and on a larger scale than is currently the case. This represents a threat to the boreal forests health and to the ecological services that boreal forests provide for our societies. It is proposed in this study that policies with an international scope be used to support forest management decisions seeking to improve the adaptive capacities of boreal forests and mitigate the impacts of global changes. On the regional scale, there are known to be several forest management options that can already be implemented to reduce the anticipated effects of climate change.

The boreal forest is one of the biggest biomes on Earth. Boreal forests account for about 30% of forests and provide many important ecological services on both a local and planetary scale. Two thirds of the boreal forests are managed, primarily for timber production. Services such as carbon sequestration and climate regulation are also provided by both the unmanaged and managed boreal forests. 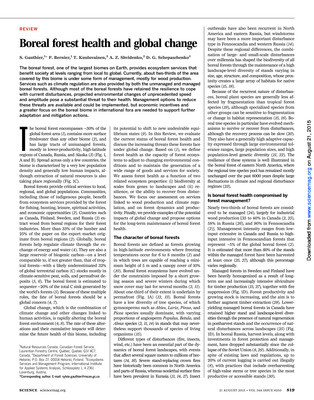