As evidence points to the importance of climate change (CC) impacts on forests, it is critical to understand how forestry and forest-dependent communities will be affected. People active in the Quebec forest sector were consulted about their perceptions on the most important potential impacts and adaptation measures. Preoccupations covered many aspects of natural ecosystems, forest-based communities, and industries. Expected impacts and adaptation measures were grouped according to biomes and sectors. Prioritized impacts included increases in extreme meteorological events and natural disturbances. Impacts were also expected for human or economic systems such as reductions in wood volume and quality, difficulties in accessing forests, and additional costs for forest operations. Adaptation was perceived to come from new policies, a greater awareness, and local and regional adjustments to forest operations and management. Identified barriers to adaptation included lack of knowledge or understanding of CC impacts, lack of scientific support and knowledge transfer, and lack of leadership in CC issues at a regional scale. This synthesis will help orient future needs in climate-sensitive forest management planning and identify ways to increase adaptive capacity of the forest sector.

By describing in scientific terms, in this article, the information sharing and consultation exercise that was held during this workshop, the researchers demonstrate how this type of activity helps to increase forestry sector participants’ awareness of climate change. The workshop may serve as a model for raising awareness in other stakeholders.

This article is a summary of the two day workshop on the impacts of climate change and options for adapting to it. Nearly 100 researchers and practitioners of Quebec’s forestry sector attended the workshop. 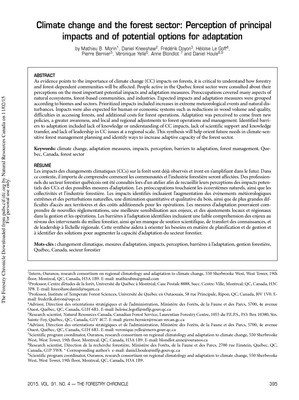