Dead wood decomposition begins immediately after tree death and involves a large array of invertebrates. Ecological successions are still poorly known for saproxylic organisms, particularly in boreal forests. We investigated the use of dead wood as nesting sites for ants along a 60-yr postfire chronosequence in northeastern coniferous forests. We sampled a total of 1,625 pieces of dead wood, in which 263 ant nests were found. Overall, ant abundance increased during the first 30 yr after wildfire, and then declined. Leptothorax cf. Canadensis Provancher, the most abundant species in our study, was absent during the first 2 yr postfire, but increased steadily until 30 yr after fire, whereas Myrmica alaskensis Wheeler, second in abundance, was found at all stages of succession in the chronosequence. Six other species were less frequently found, among which Camponotus herculeanus (Linné), Formica neorufibarbis Emery, and Formica aserva Forel were locally abundant, but more scarcely distributed. Dead wood lying on the ground and showing numerous woodborer holes had a higher probability of being colonized by ants. The C:N ratio was lower for dead wood colonized by ants than for noncolonized dead wood, showing that the continuous occupation of dead wood by ants influences the carbon and nitrogen dynamics of dead wood after wildfire in northern boreal forests.

By sampling dead wood in the boreal forest of northeastern Canada, the researchers compiled the following findings:

• the abundance of ants increases during the first 30 years following a forest fire, and subsequently decreases; • dead wood on the ground in which longhorn beetles have dug holes is more likely to be colonized by ants; • the presence of ants in dead wood has an impact on wood decomposition.

Wood decomposition begins as soon as a tree dies and involves a large number of organisms. This study increases our understanding of this phenomenon. 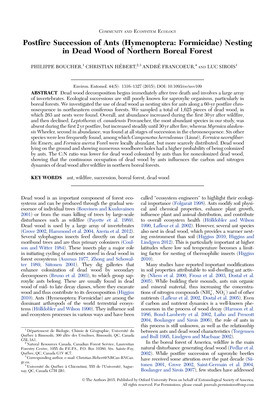