The study of insect pathogens became established as a distinct discipline in the late 1940s. In the ~65 years that followed, forest pest management was the main theatre for the development and practice of insect pathology in Canada. Researchers from the federal government and academic institutions contributed to the growing discipline by acquiring foundational knowledge on taxonomy, mode of action, natural occurrence, and ecological role of key pathogens infecting forest pest insects, covering an array of fungi, Microsporidia, viruses, and bacteria. The ultimate goal was to develop pathogen-based alternatives to synthetic insecticides used in large-scale forest protection programmes throughout eastern Canada. That goal was achieved through the development of baculovirus-based products for control of gypsy moths (Lepidoptera: Erebidae),tussock moths (Lepidoptera: Erebidae), and various sawfly(Hymenoptera)species, which are now in the hands of private industry and poised for growing operational use. The second success was the development of products based on Bacillus thuringiensis Berliner (Bacillaceae), which have almost entirely replaced synthetic insecticides in forest protection. We review those successes and other key Canadian contributions to forest insect pathology within the context of emerging digital, molecular, and other technologies, and show how they have altered today's face of forest pest management in Canada

The study of insect diseases became a recognized discipline during the 1940s. In Canada, the study of insect diseases was applied mostly to forest insects after the establishment of the Laboratory of Insect Pathology in Sault Ste. Marie in 1950. Over the ensuing 65 years, researchers of the Canadian Forestry Service contributed to the rapidly growing discipline by studying a variety of microorganisms that cause disease in forest insects: fungi, microsporidia, bacteria and viruses. The primary goal was to find pathogens that could replace DDT and other chemical insecticides that were being used in large-scale aerial spray programs to suppress forest insect outbreaks. That goal was achieved through the development of several insect-specific viruses and a bacterium, Bacillus thuringiensis, as commercially available forest insect control products. Virus-based products for control of gypsy moth, tussock moths and several sawflies have been used for operational control on a limited basis and are now produced commercially, while products based on B. thuringiensis have almost entirely replaced the use of synthetic insecticides in forest protection since the mid-1980s. In this paper we review these successes and other key Canadian contributions to forest insect pathology within the context of emerging digital, molecular and other technologies, which together have dramatically altered the face of forest pest management in Canada and elsewhere in the world. 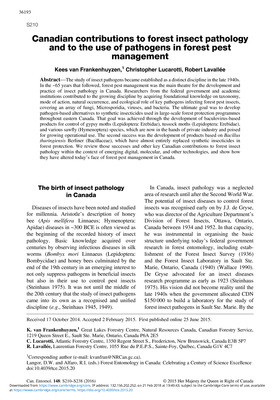