Assessing spatial variation in waterfowl harvest probabilities from banding data is challenging because reporting and recovery probabilities have distinct spatial patterns that covary temporally with harvesting regulations, hunter effort, and reporting methods. We analyzed direct band recovery data from American black ducks banded on the Canadian breeding grounds from 1970 through 2010. Data were registered to a 1-degree grid and analyzed using hierarchical logistic regression models with spatially correlated errors to estimate the annual probabilities of band recovery and the proportion of individuals recovered in Canada. Probability of harvest was estimated from these values, in combination with independent estimates of reporting probabilities in Canada and the USA. Model covariates included estimates of hunting effort and factors for harvest regulation and band reporting methods. Both the band recovery processes and the proportion of individuals recovered in Canada had significant spatial structure. Recovery probabilities were highest in southern Ontario, along the Saint Lawrence River in Quebec, and in Nova Scotia. Black ducks breeding in Nova Scotia and southern Quebec were harvested predominantly in Canada. Recovery probabilities for juveniles were correlated with hunter effort, while the adult recoveries were weakly correlated with the implementation of stricter harvest regulations in the early 1980s. Mean harvest probability decreased in the northern portion of the survey area but remained stable or even increased in the south. Harvest probabilities for juveniles in 2010 exceeded 20% in southern Quebec and the Atlantic provinces. Our results demonstrate fine-scale variation in harvest probabilities for black duck on the Canadian breeding ground. In particular, harvest probabilities should be closely monitored along the Saint Lawrence River system and in the Atlantic provinces to avoid overexploitation. 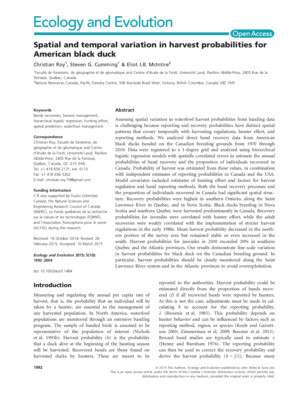