This review compiles research results published over the last 14 years on conifer somatic embryogenesis (SE). Emphasis is placed on the newest findings that affect the response of seed embryos (typical explants) and shoot primordia (rare explants) to the induction of SE and long-term culture of early somatic embryos. Much research in recent years has focused on maturation of somatic embryos, with respect to both yield and quality, as an important stage for the production of a large number of vigorous somatic seedlings. Attempts to scale up somatic embryo production numbers and handling have resulted in a few bioreactor designs, the utility of which may prove beneficial for an industrial application. A few simplified cryopreservation methods for embryonal masses (EM) were developed as a means to ensure cost-efficient long-term storage of genotypes during clonal field testing. Finally, recent long-term studies on the growth of somatic trees in the field, including seed production yield and comparison of seed parameters produced by somatic versus seed-derived trees, are described.

Somatic embryogenesis is a method of plant cloning performed in the laboratory. It makes it possible to reproduce thousands of clones of a plant with desired characteristics (size, wood quality, etc.) from a single seed. 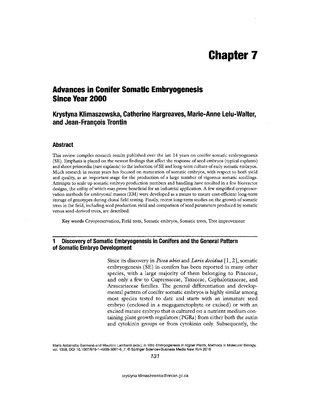