Invasive alien tree pathogens can cause significant economic losses as well as large-scale damage to natural ecosystems. Early detection to prevent their establishment and spread is an important approach used by several national plant protection organizations (NPPOs). Molecular detection tools targeting 10 of the most unwanted alien forest pathogens in Canada were developed as part of the TAIGA project (http://taigaforesthealth.com/). Forest pathogens were selected following an independent prioritization. Specific TaqMan real-time PCR detection assays were designed to function under homogeneous conditions so that they may be used in 96- or 384-well plate format arrays for high-throughput testing of large numbers of samples against multiple targets. Assays were validated for 1) specificity, 2) sensitivity, 3) precision, and 4) robustness on environmental samples. All assays were highly specific when evaluated against a panel of pure cultures of target and phylogenetically closely-related species. Sensitivity, evaluated by assessing the limit of detection (with a threshold of 95% of positive samples), was found to be between one and ten target gene region copies. Precision or repeatability of each assay revealed a mean coefficient of variation of 3.4%. All assays successfully allowed detection of target pathogen on positive environmental samples, without any non-specific amplification. These molecular detection tools will allow for rapid and reliable detection of 10 of the most unwanted alien forest pathogens in Canada.

This study shows that it is possible to quickly detect the presence of exotic pathogens (exotic forest fungi) in infected samples (leaves, roots, wood and insects) by means of molecular tests targeting the DNA molecules of those pathogens.

The purpose of the study was to develop tests that could quickly detect 10 of the most undesirable exotic forest fungi in Canada. These fungi were drawn from a list of over 100 forest fungi regulated by phytosanitary agencies worldwide. The tests that were developed can be ran independently (detecting one species at a time) or simultaneously (detecting several species at once).

The tests were also shown to be precise and sensitive to the presence of specific exotic pathogens. 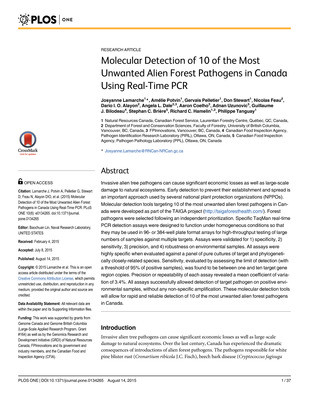