An increasing number of studies conclude that water limitations and heat stress may hinder the capacity of black spruce (Picea mariana (Mill.) B.S.P.) trees, a dominant species of Canada’s boreal forests, to grow and assimilate atmospheric carbon. However, there is currently no scientific consensus on the future of these forests over the next century in the context of widespread climate warming. The large spatial extent of black spruce forests across the Canadian boreal forest and associated variability in climate, demography, and site conditions pose challenges for projecting future climate change responses. Here we provide an evaluation of the impacts of climate warming and drying, as well as increasing [CO2], on the aboveground productivity of black spruce forests across Canada south of 60°N for the period 1971 to 2100. We use a new extensive network of tree-ring data obtained from Canada’s National Forest Inventory, spatially explicit simulations of net primary productivity (NPP) and its drivers, and multivariate statistical modeling. We found that soil water availability is a significant driver of black spruce interannual variability in productivity across broad areas of the western to eastern Canadian boreal forest. Interannual variability in productivity was also found to be driven by autotrophic respiration in the warmest regions. In most regions, the impacts of soil water availability and respiration on interannual variability in productivity occurred during the phase of carbohydrate accumulation the year preceding tree-ring formation. Results from projections suggest an increase in the importance of soil water availability and respiration as limiting factors on NPP over the next century due to warming, but this response may vary to the extent that other factors such as carbon dioxide fertilization, and respiration acclimation to high temperature, contribute to dampening these limitations.

In this study, researchers show that the global warming predicted by the end of the 21st century would result in lower productivity in Canada’s black spruce forests, despite the longer growing seasons.

Researchers came to this conclusion after studying the impact of climatic fluctuations on the growth of black spruce between 1970 and 2004. Higher temperatures and lack of water in the soil limit the trees’ growth.

Using a growth model, researchers then estimated spruce growth based on various climate scenarios. Although temperature changes would improve growth conditions in northern Canada, the benefits would be cancelled out in the black spruce forests of the south, notably by a decrease in soil humidity, which is necessary for tree growth.

Lastly, an increase in atmospheric carbon dioxide would have a fertilizing effect on trees, but this effect would clearly be insufficient to counter the negative impacts of higher temperatures. 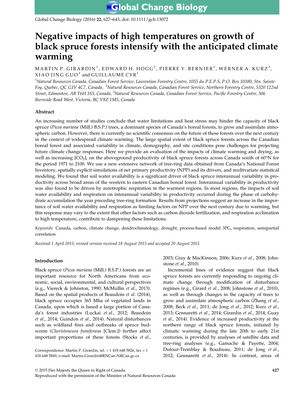