Phasgonophora sulcat Westwood (Hymenoptera: Chalcididae) is a North American parasitoid now using Agrilus planipennis Fairmaire (Coleoptera: Buprestidae) as a novel host, and may prove useful in biocontrol. Unfortunately, information is lacking regarding mating and the presence of pheromones, which may be important when attempting to exploit this parasitoid within a management context. Herein we used olfactometer assays and behavioural observations to determine the courtship and mating sequences of P. sulcata. A significantly higher proportion of males oriented towards females over the control arm containing filtered air in an olfactometer regardless of the age classes of females or males examined. We also observed four pre-copulatory behaviours that were consistent in all mating pairs. Our results indicate that courtship may be mediated by male perception of female-produced pheromones. Understanding the courtship sequence may be useful in rearing laboratory populations, while the putative pheromones may be useful in detection and retention of P. sulcata population

Phasgonophora sulcata is a North American parasitoid now using emerald ash borer as a novel host, and may prove useful in biocontrol. Unfortunately, information is lacking regarding mating and the presence of pheromones, which may be important when attempting to use this parasitoid as a biological control agent to manage emerald ash borer. Laboratory experiments and observations suggested that females use a pheromone to attract males regardless of the ages of the adults. Pairs of adults performed a consistent sequence of courtship behaviours prior to mating. Understanding the courtship behaviours may be useful in rearing the parasitoids in the laboratory, while the presence of a sex pheromone may be useful in the detection populations of the parasitoid in the field or in keeping the parasitoid in the vicinity of the host. 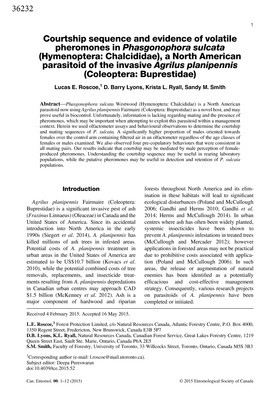