Body size is correlated with potential fecundity in capital breeders, but size-dependent functions of realized fecundity may be impacted by reproductive losses due to mating failure or oviposition time limitations (number of eggs remaining in the abdomen of females at death). Post-mortem assessment of adults collected in the field after natural death represents a sound approach to quantify how body size affects realized fecundity. This approach is used here for two Lepidoptera for which replicated field data are available, the spruce budworm Choristoneura fumiferana Clemens (Tortricidae) and bagworm Metisa plana Walker (Psychidae). Dead female budworms were collected on drop trays placed beneath tree canopies at four locations. Most females had mated during their lifetime (presence of a spermatophore in spermatheca), and body size did not influence mating failure. Oviposition time limitation was the major factor restricting realized fecundity of females, and its incidence was independent of body size at three of the four locations. Both realized and potential fecundity of female budworms increased linearly with body size. Female bagworms are neotenous and reproduce within a bag; hence, parameters related to realized fecundity are unusually tractable. For each of five consecutive generations of bagworms, mating probability increased with body size, so that virgin-dead females were predominantly small, least fecund individuals. The implication of size-dependent reproductive losses are compared for the two organisms in terms of life history theory and population dynamics, with an emphasis on how differential female motility affects the evolutionary and ecological consequences of size-dependent realized fecundity.

The study investigated the relationships between body size and lifetime fecundity in two species of Lepidoptera (spruce budworm, Tortricidae; bagworm, Psychidae) that share a combination of life-history traits (defoliation of perennial trees, larval ballooning, polyphagy, eggs laid indiscriminately in clusters, eruptive population dynamics) but have distinct reproductive systems. Neotenic female bagworms reproduce nearby their feeding site, whereas female budworms often migrate over long distances after having laid about 50% of their eggs. Based on the interspecific approach derived in the study, the abundance and estimated reproductive output of female budworms appears of limited help in forecasting future larval densities due to the unknown nature and large extent of dispersal movement. Specifically, I recommend discarding the ‘egg-to-pupa’ ratio as a tool for estimating budworm reproduction 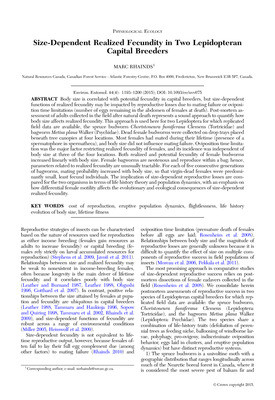