Soil microbial biomass is a key source of soil organic carbon (SOC), and the increasing proportion of microbially derived SOC is thought to drive the enrichment of 13C during SOC decomposition. Yet, little is known about how the δ13C of soil microbial biomass differs across space or time, or with the composition of the microbial community. Variation in soil microbial δ13C may occur due to variation in substrates used by soil microorganisms, and variation in how different microorganisms synthesize biomass. Understanding these variations in soil microbial δ13C would enable more accurate interpretation of patterns in the δ13C of SOC. Here, we report the variation in δ13C values of individual phospholipid fatty acids (PLFA) within podzolic soils from mesic boreal forests characterized by steep decreases in fungal to bacterial (F:B) ratios. By comparing trends in δ13C of PLFA indicative of either fungi or bacteria to those PLFA common across both microbial groups, we tested the hypothesis that the enrichment of 13C in bacterial relative to fungal biomass represents a mechanism for the increase of bulk SOC δ13C with depth. We demonstrate that PLFA derived from fungi were consistently depleted in 13C (−40.1 to −30.6 ‰) relative to those derived from bacteria (−31.1 to −24.6 ‰), but unlike bulk SOC the δ13C of PLFA from either group did not vary significantly with depth. In contrast, the δ13C of PLFA produced by both fungi and bacteria, which represent the δ13C of soil microbial biomass as a whole, strongly increased with depth (increase of 7.6–8.4 ‰) and was negatively correlated with the fungi/(fungi + bacteria) ratio (R2 > 0.88). The steep increase of the δ13C of general PLFA with depth cannot be explained by an increase in the δ13C of either fungal or bacterial biomass alone since the PLFA indicative of those groups did not vary with depth. Instead, these data demonstrate that the increase in soil biomass δ13C with depth is driven by a change in the proportion of bacterial relative to fungal biomass. We suggest that the increased proportions of soil bacterial relative to fungal biomass with depth may represent an important mechanism contributing to increasing δ13CSOC with depth via contributions from ‘necromass’ to SOC.

Researchers are seeking better ways to understand how soil organic matter, which includes a variety of carbon-based compounds, changes as it decomposes from fresh fallen litter to highly processed mixtures in more developed and deeper soils. One approach is to track changes in the proportion of carbon elements existing in different forms, or isotopes. For example, the amount of the 13C isotope increases relative to the 12C isotope as the soil is processed by microorganisms (bacteria and fungi), so higher proportions of 13C in soils reveals a history of greater microbial processing. This paper is the product of a collaboration between academic and government scientists studying various aspects of Eastern mesic Boreal forests (Newfoundland and Labrador Boreal Ecosystem Latitudinal Transect; NL-BELT). The main finding here is that the proportion of 13C and 12C in soil organic matter is reflective not only of microbial processing generally, but of the proportion of fungi and bacteria acting on the organic material; in other words, fungal and bacterial processing leave slightly different traces in the soil. This knowledge can be utilized to better understand observed differences between soils over time and space, and in response to various disturbances. 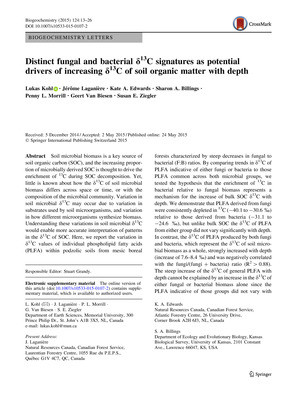