Diseases of poplar caused by the native fungal pathogen Sphaerulina musiva and related species are of growing concern, particularly with the increasing interest in intensive poplar plantations to meet growing energy demands. Sphaerulina musiva is able to cause infection on leaves, resulting in defoliation and canker formation on stems. To gain a greater understanding of the different responses of poplar species to infection caused by the naturally coevolved Sphaerulina species, RNA-seq was conducted on leaves of Populus deltoides, P. balsamifera and P. tremuloides infected with S. musiva, S. populicola and a new undescribed species, Ston1, respectively. The experiment was designed to contain the pathogen in a laboratory environment, while replicating disease development in commercial plantations. Following inoculation, trees were monitored for disease symptoms, pathogen growth and host responses. Genes involved in phenylpropanoid, terpenoid and flavonoid biosynthesis were generally upregulated in P. balsamifera and P. tremuloides, while cell wall modification appears to play an important role in the defense of P. deltoids. Poplar defensive genes were expressed early in P. balsamifera and P. tremuloides, but their expression was delayed in P. deltoids, which correlated with the rate of disease symptoms development. Also, severe infection in P. balsamifera led to leaf abscission. This data gives an insight into the large differences in timing and expression of genes between poplar species being attacked by their associated Sphaerulina pathogen.

This study reports on the reaction of genes to infection by Sphaerulina musiva, the fungus responsible for septoria canker, and by species of the same genus in different types of poplar. Results show that the genetic expression of the disease varies depending on the type of poplar infected by the fungus.

Due to growing interest in the intensive cultivation of poplars for energy purposes, the diseases caused by this pest are worrisome. This pathogen can infect leaves, which causes defoliation, and it can lead to the formation of trunk cankers. This research offers a clearer picture of the resistance of different species of poplar to this disease. 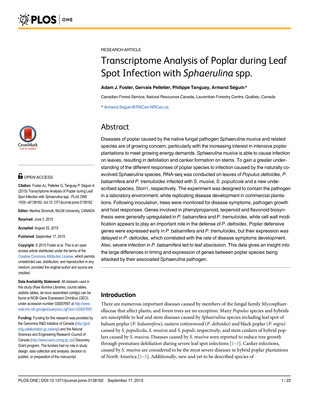