In existing carbon budget models, carbon stocks are not explicitly related to forest successional dynamics and environmental factors. Yet time-since-last-fire (TSLF) is an important variable for explaining successional changes and subsequent carbon storage. The objective of this study was to predict the spatial variability of aboveground biomass carbon (ABC) as a function of TSLF and other environmental factors across the landscape at regional scales. ABC was predicted using random forest models, both at the sample-plot level and at the scale of 2-km2 cells. This cell size was chosen to match the observed minimum fire size of the Canadian large fire database. The percentage variance explained by the empirical sample-plot level model of ABC was 50%. At that scale, TSLF was not significantly related to ABC. At the 2-km2 scale, ABC was influenced mainly by the proportions of cover density classes, which explained 83% of the variance. Changes in cover density were related to TSLF at the same 2-km2 scale, indicating that the increase in cover density following fire disturbance is a dominant mechanism through which TSLF acts upon ABC at the scale of landscapes.

This study shows that in order to determine boreal forest carbon dynamics, it is important to know and monitor a forest’s resilience after fire.

The purpose of this study was to determine whether it is possible to predict variability in the carbon content of aboveground biomass based on time since the last fire. According to existing carbon budget models, carbon stocks are not related to forest composition variability or environmental factors. However, the time elapsed since the last fire is an important variable for explaining changes in forest succession and carbon stocks.

Fires play an important role in boreal forest dynamics. Accounting for 32% of the world’s forest carbon, boreal forests are comparable to tropical forests in terms of carbon stocks. 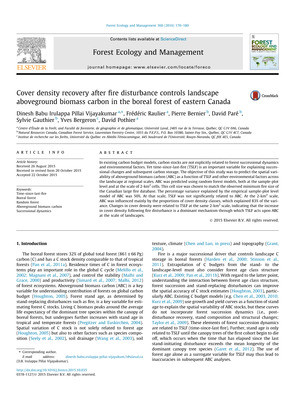