A tool was developed to allow managers and foresters to quickly assess reforestation needs following forest fire and salvage logging at the stand level in both pure and mixed black spruce and jack pine stands. This on-site operational assessment tool was created using a forest regeneration model that simulates the natural regeneration densities of black spruce and jack pine following fire and salvage. Tree species basal areas used for simulations represent the natural range expected in the field. Additional parameters include the abscission schedule of the species, the percentage of optimal (exposed mineral soil or humus) post-fire seedbeds, and the timing of the salvage operation. The tool also allows for rapid planning of both salvage operations and planting. It has important advantages over conventional seedling surveys in that it can be employed immediately following fire, can guide management decisions about the planning of road construction and the harvest sequence, and takes into account the entire establishment phase. Using the tool to adjust the harvesting schedule to minimize replanting, the likely final cost of reforestation can be estimated for an entire burn. The tool shows that a higher percentage of optimal seedbeds are necessary following salvage: (1) for black spruce to regenerate adequately compared to jack pine (i.e., planting of black spruce will almost always be necessary); (2) as basal area of the species of interest decreases; and, (3) to adequately regenerate burned intact and salvaged stands in late-season fires compared with those from early-season fires.

This article presents a tool that can be used to quickly plan tree salvage and planting operations in recently burned stands. The main goal is to ensure rapid rehabilitation. This tool can be used in pure or mixed black spruce stands as well as jack pine forests.

Thanks to this tool, which can be used directly in forests, forest managers will be able to adjust their harvest schedule, plan their road construction needs, and minimize reforestation costs, among other things. 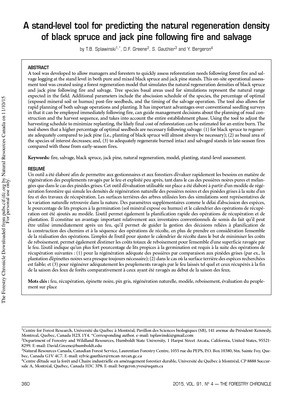