In 1972, it was reported that viable ascospores and conidia of Gremmeniella abietina, North American race, were present on dead branches up to 10 months after they were killed. In Sweden, the survival period of conidia of G. abietina, European race, was reported to be over 18 months. We investigated the viability of conidia produced by G. abietina, European race, over a 2-year period in eastern Canada. Infected branches with pycnidia were left on the ground in June 2006. Branches were sampled every month during three growing seasons. Conidia germination was tested monthly and showed a very high rate of germination (76%–98%) from July 2006 to August 2007. Very few pycnidia were detected in the fall of 2007 and in May 2008. In June and July 2008, no pycnidia could be observed, the shoots being in an advanced stage of decomposition. In light of these observations, it is recommended to delay pine plantation until after two growing seasons following harvesting of diseased pine trees.

In light of the results of this study conducted in eastern Canada, researchers recommend waiting two seasons before proceeding with pine reforestation on a site where scleroderris canker (European strain) has been detected. This period makes it possible to ensure the disease is no longer present on the site and that it will not spread to young trees. However, this waiting period is not necessary when white pine is used for reforestation since this species is not sensitive to the disease.

The European strain of scleroderris canker, which was first reported in North America in 1975, mainly attacks red pine, causing trunk cankers and shoot blight. It can cause the death of young pines measuring less than 6 m within a few years. 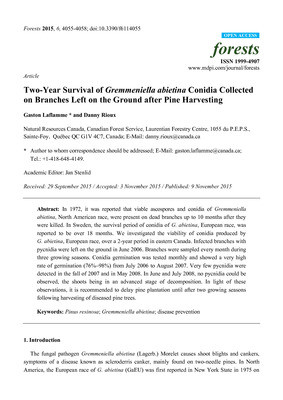