The objective of this paper is to examine the sensitivity of fuel moisture to changes in temperature and precipitation and explore the implications under a future climate. We use the Canadian Forest Fire Weather Index System components to represent the moisture content of fine surface fuels (Fine Fuel Moisture Code, FFMC), upper forest floor (duff) layers (Duff Moisture Code, DMC) and deep organic soils (Drought Code, DC). We obtained weather data from 12 stations across Canada for the fire season during the 1971–2000 period and with these data we created a set of modified weather streams from the original data by varying the daily temperatures by 0 to +5 °C in increments of 1 °C and the daily precipitation from −40 to 40 % in increments of 10 %. The fuel moistures were calculated for all the temperature and precipitation combinations. When temperature increases we find that for every degree of warming, precipitation has to increase by more than 15 % for FFMC, about 10 % for DMC and about 5 % for DC to compensate for the drying caused by warmer temperatures. Also, we find in terms of the number of days equal to or above an FFMC of 91, a critical value for fire spread, that no increase in precipitation amount alone could compensate for a temperature increase of 1 °C. Results from three General Circulation Models (GCMs) and three emission scenarios suggest that this sensitivity to temperature increases will result in a future with drier fuels and a higher frequency of extreme fire weather days.

The ignition and spread of forest fires is strongly influenced by moisture content in the forest fuels that burn. Moisture content of forest fuels can be described as a balance between the drying effect of air temperature and the wetting effect of rainfall. In this paper we explored this balance between drying and wetting and found that in general very significant increases in rainfall are needed to balance the increased drying from relatively modest increases in air temperature. Thus we expect that, in future, areas across Canada that will see increased temperatures due to climate change will likely see increased fire activity, despite changes in rainfall patterns and amounts. Analysis from three complex atmospheric models of future climate supports these findings. 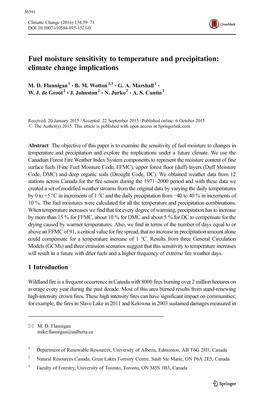