Infection by Nosema fumiferanae (Thomson) (Microsporidia: Nosematidae) and feeding by late-instars on previous year's foliage due to depletion of current year's growth (also known as back-feeding) are likely to co-occur in high-density outbreak populations of the spruce budworm (Choristoneura fumiferana (Clemens) (Lepidoptera: Tortricidae)). We tested the hypothesis that effects of the two factors on larval fitness are exacerbated by their interaction. Twigs of balsam fir (Abies balsamea Linnaeus; Pinaceae) with or without new-growth shoots were fed to sixth-instar offspring from uninfected, moderately infected, or highly infected females in two laboratory experiments.Pupal mass and time to reach the pupal stage were significantlyaffectedby infection and back-feeding but not by their interaction. Pupal mass decreased and development time increased with increasing spore burden in a linear fashion. Back-feeding had a significant effect on survival to the pupal stage, but infection did not, nor did their interaction. The relatively small changes in survival, pupal mass, and development time caused by infection and back-feeding were additive. The results thus refute our hypothesis that infection by N.fumiferanaeand forced feeding on last year's foliage by late instars are likely to interact in affecting spruce budworm recruitment in older outbreak populations.

Spruce budworm carries a disease caused by the microorganism Nosema fumiferanae. The disease does not kill but debilitates the insect through various sublethal effects. It can become very prevalent when larval densities are high. High larval densities also cause larvae to consume all new growth (current year’s shoots) and force them to feed on old needles (last year’s growth). Because old needles are nutritionally inferior, this also debilitates spruce budworm. We tested the hypothesis that debilitating effects of feeding on old needles and the Nosema disease interact with each other. Our results suggest that this is not the case: effects of infection and feeding on old foliage on pupal mass, larval survival and development were simply additive. 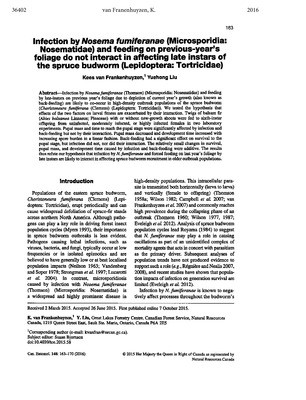