An understanding of mating systems and fine-scale spatial genetic structure is required to effectively manage forest pest species such as Dendroctonus ponderosae (mountain pine beetle). Here we used genome-wide single-nucleotide polymorphisms to assess the fine-scale genetic structure and mating system of D. ponderosae collected from a single stand in Alberta, Canada. Fine-scale spatial genetic structure was absent within the stand and the majority of genetic variation was best explained at the individual level. Relatedness estimates support previous reports of pre-emergence mating. Parentage assignment tests indicate that a polygamous mating system better explains the relationships among individuals within a gallery than the previously reported female monogamous/male polygynous system. Furthermore, there is some evidence to suggest that females may exploit the galleries of other females, at least under epidemic conditions. Our results suggest that current management models are likely to be effective across large geographic areas based on the absence of fine-scale genetic structure.

This research explores how mountain pine beetles (MPB) mate, to help in managing infestations. A key research question was whether the genetic makeup of MPB is related to where they are located within a given stand of trees. The research used an analysis of common variations in the insect’s genome to understand the genetic makeup and mating system of MPB in a single stand in Alberta. The genetic makeup of MPB was not related to where the beetles were located within the stand. Instead, most of the genetic variation was best explained by differences among individuals. MPBs can be monogamous or polygamous, and new adults sometimes mate before they emerge from trees to disperse. Furthermore, there is some evidence that some females may enter the galleries of other females and reproduce there, at least when MPB populations are low. Results suggest that current MPB management methods are likely to be effective across large geographic areas, as the genetic mixing means that there is a low likelihood that there are populations sufficiently different genetically to be resistant to common management approaches. 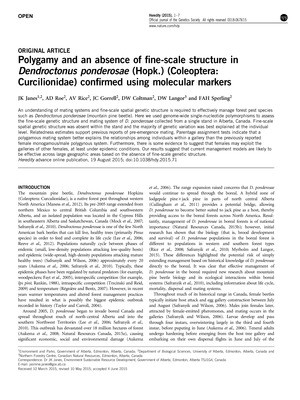