In the managed boreal forest, harvesting has become a disturbance as important as fire. To assess whether forest recovery following both types of disturbance is similar, we compared post-disturbance revegetation rates of forests in 22 fire events and 14 harvested agglomerations (harvested areas over 5–10 years in the same vicinity) in the western boreal forest of Quebec. Pre-disturbance conditions were first compared in terms of vegetation cover types and surficial deposit types using an ordination technique. Post-disturbance changes over 30 years in land cover types were characterized by vectors of succession in an ordination. Four post-disturbance stages were identified from the 48 land thematic classes in the Landsat images: “S0” stand initiation phase; “S1” early regeneration phase; “S2” stem exclusion phase; and “S3” the coniferous forest. Analyses suggest that fire occurs in both productive and unproductive forests, which is not the case for harvesting. Revegetation rates (i.e., rapidity with which forest cover is re-established) appeared to be more advanced in harvested agglomerations when compared with entire fire events. However, when considering only the productive forest fraction of each fire, the revegetation rates are comparable between the fire events and the harvested agglomerations. The S0 is practically absent from harvested agglomerations, which is not the case in the fire events. The difference in revegetation rates between the two disturbance types could therefore be attributed mostly to the fact that fire also occurs in unproductive forest, a factor that has to be taken into account in such comparisons.

In this study, researchers show that harvested stands recover more quickly than burned stands in western Quebec’s boreal forest. However, in the case of productive stands, forest recovery rates after fire or harvest are comparable.

This research will contribute to the development of ecosystem management approaches that emulate natural disturbances. 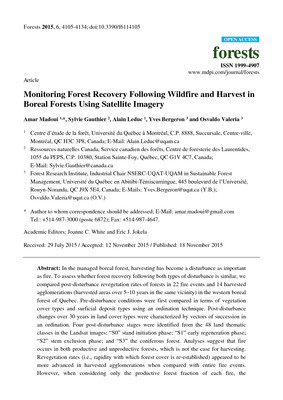