The VINCERA (Vulnerability and Impacts of North American Forests to Climate Change: Ecosystem Response and Adaptation) project was a collaborative effort between vegetation modeling teams from the UK, Canada, and the US to investigate possible impacts of climate change and increasing atmospheric CO2 concentration on the key attributes of forests and other natural ecosystems. In many ways, the VINCERA project was intended to be a continental scale extension of the US-focused Vegetation/Ecosystem Modeling and Analysis Project (VEMAP; VEMAP members, 1995; http://www.cgd.ucar.edu/vemap/) carried out by a large group of researchers in the late 1990s. Two dynamic global vegetation models (DGVMs) (MC1 and SDGVM) were compared, each driven by the same suite of six scenarios of future climate taken from the projections simulated by three state-of-the-art global climate models (CSIRO, CGCM2, HadCM3). A continental soils dataset was also constructed from available data to ensure as much consistency as possible in the forcing datasets. Results showed that differences in the results of the two vegetation models resulting from their different treatments of the CO2 fertilization effect (moderate enhancement of water use efficiency in MCl, large effect in SDGVM) and their simulation of wildfires (fixed annual burn rate in SDVM, climate- and fuel-type-driven fire events in MCI ) were larger than differences in their responses to climate futures and emission scenarios. Uncertainty in soil properties also affected the robustness of the projections of drought stress in the future.

The paper summarizes content of an internal report published in 2006 about comparisons of the results obtained from three different computer models of global vegetation processes, known as “Dynamic Global Vegetation Models (DGVM). Researchers from universities in the UK, the USA and the Canadian Forest Service aimed to investigate possible impacts of climate change and increasing atmospheric CO2 concentration on the key attributes of forests and other natural ecosystems in continental North America (excluding Mexico). Each model was driven by the same suite of six scenarios of future climate projected by three global climate models. The results were interesting mainly because they revealed very significant contradictions among the three DGVMs, leaving the researchers to conclude that more work would be needed to resolve these differences. 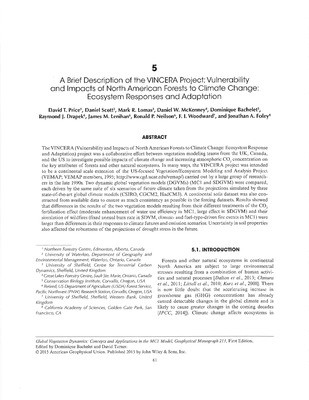