Green tree retention is thought to conserve biodiversity in harvested landscapes; however, the amount and distribution of retention that best meets conservation goals remains unclear. To clarify size of retention patches needed to effectively conserve saproxylic (i.e., deadwood-associated) beetles in western Canada, we compared beetle assemblages among patches of three size categories (small: 0.63–1.06 ha, medium: 1.43–2.93 ha, and large: 3.34–5.93 ha) left in harvested areas with those from intact forests and harvested matrix. To understand edge effects as a potential driver of faunal changes associated with patch size, we also compared assemblages from edges and centers of retention patches. Saproxylic beetle assemblages similar to those in intact forests were well maintained in all patch centers, but assemblages in small and medium patches were strongly influenced by edge effects and were least similar to those in intact forests. Particular trophic guilds showed distinct responses to patch size. Predator assemblages showed negative edge effects in small and medium patches, while phloeophage assemblages did not differ between edges and centers of different patch sizes. Although smaller patches may better emulate historical size distributions of fire skips, conservation value is likely maximized in large patches, mainly by decreasing edge effects. Our study dealt mainly with ‘initial colonizers’, but further studies to define minimum patch size for retention harvest must be conducted over time to incorporate effects on species associated with well-decayed deadwood.

This research explored whether the size of patches of trees on landscapes where harvesting has been carried out is important to conserve beetle communities in dead wood. We studied white spruce in stands harvested 10 years earlier and in intact, unharvested forest in the boreal forest of northwestern Alberta. Patches of forest that had not been harvested ranged in size from 0.6 to 5.9 hectares. We collected beetles from communities that live in relatively recently dead wood at the edges and centres of patches and in intact forests and identified their species. All sizes of patches had some species found in intact forest, but the communities in large patches were most similar to those in intact forest. We found that the edges of patches were not suitable habitat for species that lived at the centres of patches. This decreased the portion of the patch suitable for these species. The key lessons to be applied to forest management are that even small patches of unharvested forest are valuable for conservation of some beetle species found in intact forest. But patches larger than 3 hectares have higher conservation value than smaller patches because they provide suitable habitat for more species. These lessons can help the forest industry make better decisions about the size of stands to leave unharvested for conservation purposes. 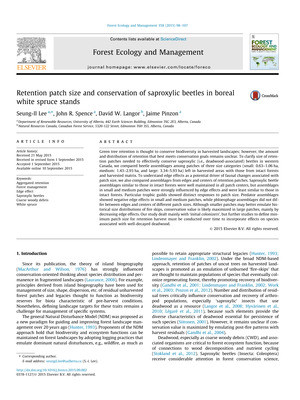