Wildfire plays an important role in ecosystems of the Pacific Northwest, but past relationships among fire, climate, and human actions remain unclear. A multiscale analysis of thirty-four macroscopic charcoal records from a variety of biophysical settings was conducted to reconstruct fire activity for the Pacific Northwest (PNW) during the past 12,000 years. Trends in biomass burning and fire frequency are compared to paleoenvironmental and population data at a variety of temporal and spatial scales to better understand fire regime variability on centennial- to millennial-length time scales. PNW fire activity in the early Holocene is linked to climatic and vegetation changes; however, increased fire activity in the middle to late Holocene is inconsistent with long-term trends in temperature and precipitation. Two hypotheses are explored to explain the rise in fire activity after ca. 5,500 calendar years before present, including greater climate variability and increased human use of fire. Climatic changes such as increased El Niño/Southern Oscillation event frequency during the past approximately 6,000 years could have led to hydrologic shifts conducive to more frequent fire events, despite overall trends toward cooler and moister conditions. Alternatively, increasing human populations and their associated uses of fire might have increased biomass burning. Centennial-scale changes in fire activity, such as during the Medieval Climate Anomaly and the Little Ice Age, closely match widespread shifts in both climate and population, suggesting that one or both influenced the late-Holocene fire history of the PNW.

Fire is inherent in ecosystems in the Pacific Northwest region of North America. This manuscript focuses on examining how factors influencing fire such as climate, vegetation, and human activity have changed through time. Fire was initially controlled by climate and vegetation. During the last several thousand years, however, the incidence of fire is inconsistent with trends in temperature and precipitation, suggesting that another factor may have become important. Human populations and their associated use of fire may have contributed to higher levels of biomass burning as forests and woodlands were cleared and used, even as climate was cooling and moistening. This study reveals the various drivers affecting fire regimes through time. Further, it also reveals the rate and magnitude of fire regime shifts and provides an important baseline to evaluate modern changes to the fire regime. Finally, it shows that the response of a fire regime to changes in climate is not always straightforward, but rather can be complicated by other mechanisms such as changes in vegetation or human activity. 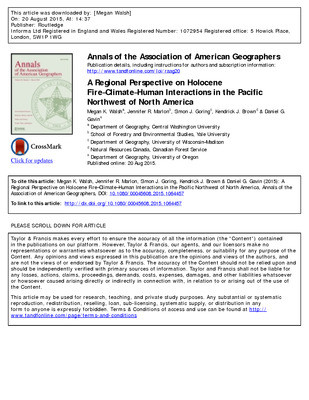