In September 2003, the Canadian Food Inspection Agency (CFIA) confirmed the discovery of an Asian longhorned beetle population in the Toronto-Vaughan area. The agency established a regulated area of 152 km2, implemented an eradication program and declared that regulated area beetle-free in April 2013. On 13 August 2013, a private citizen found an adult Asian longhorned beetle in Mississauga, about 2 km outside the boundaries of the area regulated between 2003 and 2013. The agency sent that specimen for a DNA barcoding analysis and initiated a delimitation survey. The beetle did not differ genetically from those of the population from 2003. Inspectors found a heavily infested three-stemmed maple tree (> 200 exit holes) near the site of discovery in 2013. Examination of some tree cross-sections, sliced from live sections of the bole of these infested trees, revealed signs of attack dating back to at least 2004, suggesting this 2013 infestation could be an overlooked satellite population of the 2003 infestation. Only 50 trees were found to be infested in Mississauga: Most (49 of 50 trees) were maples: Manitoba maples were the most frequently attacked species (38). 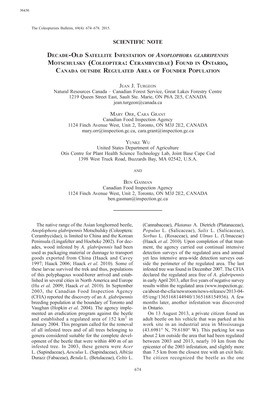