ALS data is increasingly being used to enhance forest inventories across Canada. Since these data are expensive to acquire, opportunistic use of existing ALS data has been common. As many of these data were acquired under leaf-off canopy conditions to support terrain mapping applications, an outstanding question has been the suitability of these data for modelling forest inventory attributes. A growing body of evidence in the scientific literature suggests that leaf-off data can be used to generate accurate models of inventory attributes, however many of these studies have been conducted in managed boreal forest environments. Moreover, whilst the results have been compelling for coniferous forest types, existing studies have been less conclusive for mixed or deciduous forest types. These results affirm that leaf-off data can be used effectively in an area-based approach to estimate forest attributes for both coniferous and deciduous forest types, and that the mixing of leaf-on models with leaf-off data and vice versa can result in large model error and bias for both forest types, and therefore mixing of models and data types should be avoided. 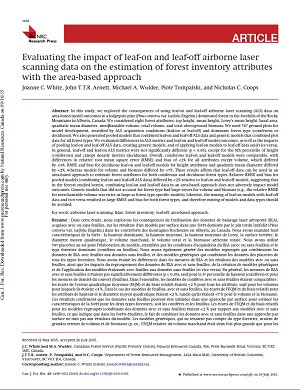