Beginning about the turn of the century, an outbreak of the mountain pine beetle (MPB) extended beyond its historic range in southern Alberta. This outbreak was facilitated by a series of mild winters and an influx of beetles from a massive outbreak in the neighbouring province of British Columbia. Given that much of this outbreak has occurred on publicly owned land, if the response to the beetle outbreak is to be effective it will require public acceptance of MPB management. We examined public perceptions of risks, attitudes toward the MPB, acceptability of management options, satisfaction with response to the MPB infestation, trust in government and the forest industry, awareness of MPB and its management, and where the public obtains MPB information. In 2009, we conducted a mail survey of residents (n = 1303) in three regions of the western, forested area of the province and an Internet survey of land managers (n = 43). Results show that residents were poorly informed about the MPB, but they perceived it as having negative impacts on forests and communities. Most residents were somewhat satisfied with the overall government response to the MPB and they supported action to control the beetle. They rated most control options as acceptable and effective, and they had a moderate level of trust in government and the forest industry. Residents used a variety of sources for MPB information including media, the provincial and federal governments, and the forest industry. Residents in the three regions differed in terms of their concerns about the economic impacts of the MPB and the beetle’s effects on scenic quality, their acceptance of harvesting to control the beetle, their views on the effectiveness of controls, and their level of trust in government and the forest industry. Land managers and residents shared a negative view of the MPB and supported harvesting activities to control the MPB but they differed in terms of their concerns for non-timber impacts, satisfaction with the response to the beetle, and trust in the provincial government and forest industry. Implications of these findings for developing communication strategies, engaging the public, and incorporating the public’s concerns into management plans and control options are discussed.

Since the 1990s the mountain pine beetle has increased in population and spread beyond its historical range in western Canada, affecting forests and communities. As the beetle continues to spread, public acceptance of its management will be important if the response is to be effective. In this study, we examined regional variation in Albertans’ perceptions of the beetle and in their views on the options for responding to the outbreak, and we determined whether land managers’ views differed from those of the public. Results showed that the public were poorly informed about the beetle but were concerned about its impacts on forests and communities. They strongly supported beetle control and found most management actions to be acceptable. They were moderately satisfied with the response to the beetle and had a moderate level of trust in government and the forest industry. We observed some regional differences in the perceptions of the public as well as differences between the views of the public and those of land managers. The findings from this study can inform decisions about how to communicate with the public and how to engage the public and incorporate their concerns into management plans and control options. 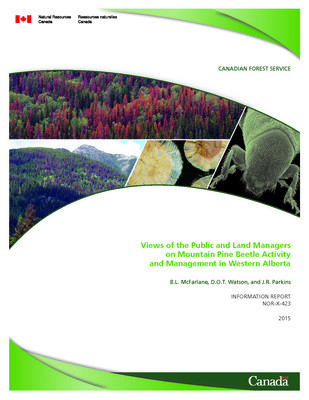