This report presents updated versions of the FORTRAN 77 program originally published by the Canadian Forest Service in 1985 and used to calculate the Canadian forest fire weather indices from daily weather observations. The updated program is presented here in FORTRAN 95, C, C++, Python, Java and SAS/IML programming languages to meet the needs of various users. The updated versions are easier to understand and use than the original source code. The updated source codes were written in a modular programming style, consisting of a main program and several subroutines, to enable easy incorporation into other programs. The updated programs were tested against the original FORTRAN 77 code to ensure that consistent results would be obtained. The availability of these source codes allows users to confidently incorporate the Canadian forest fire weather indices into their own programs.

The Fortran 77 program used for calculating Canadian Forest Fire Weather Indices was first published in 1985. It needed to be updated to better serve the forest fire research community around the world. The authors re-wrote the program in the programming languages of Fortran 95, C, Python, and Java. People in the scientific community may be trying to implement the Fortran 77 program. Our results represent useful and handy tools for these researchers. 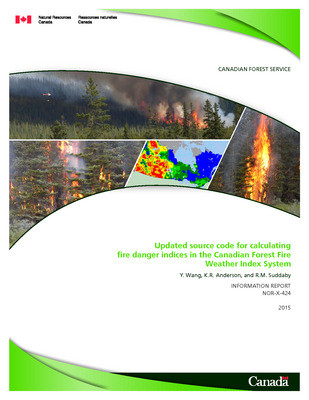