The role of net primary productivity (NPP) allocation to tree organs as a parameter reflectingthe ecological strategy of trees is discussed. The application of an individual-based spatially explicit simulation model of the tree-soil system (EFIMOD) to European and North American boreal forests reveals significant differences in ecological parameters (silvics) between, on one hand, North American jack pine (Pinus banksiana Lamb.) and black spruce (Picea mariana Mill.) of Canadian boreal forests and, on the other hand, European Scots pine (Pinus sylvestris L.) and Norway spruce (Picea abies L. [Karst.]). A significant difference between these two groups of species was found in the NPP allocation between needles and fineroots. The proportion of annual biomass increment reflectedby NPP that is allocated to fineroot production is higher in the North American coniferous species than in the European ones. Simulation experiments were performed to investigate the influenceof NPP allocation on the components of carbon balance and wood productivity. Additionally, a parameter “turnover capacity” (TC), which is defined as the sum of NPP and soil respiration, was used. North American and European conifers were compared in two sets of simulations. In the firstset, simulation was performed upon changes in NPP allocation in tree species ‘growing’ under their native conditions (Canada or Russia). In the second set, the Canadian conifers were simulated under the Russian climate and soil conditions, whereas the European ones, under the respective Canadian conditions. The results showed considerable differences, which depended on the NPP allocation patterns, in tree growth rate, root development, and parameters of carbon balance. Trees with relatively high NPP proportions allocated to fineroot production demonstrated lower growth rates even at a high carbon turnover capacity corresponding to the milder climate of European Russia. On the other hand, trees with the European, more uniform, NPP allocation pattern showed higher growth rates compared with the Canadian trees even under the colder continental conditions of Central Canada. The results suggest that wood productivity levels may be significantly different at similar NPP and TC if trees have diffeent NPP allocation patterns. This difference reflects the adaptation of the North American coniferous species to harsh soil and climatic conditions, which are very cold in the northern and very dry in the southern part of Central Canadian boreal forests. NPP allocation index (NPP partitioning between leaves and fineroots) is proposed as a measure of tree stress tolerance, adaptation to severe climatic conditions, and ecological strategy.

Tree species in the boreal forest are very different between European and North American forests, and this study helps to explain why. Trees evolve differently in different ecosystems by putting more growth energy into different parts of the tree. This study, conducted in Russia and Canada, used a computer model to look at differences between jack pine and black spruce in Canada, on one hand, and Scots pine and Norway spruce in Russia, on the other. The computer model was used to discover what would happen if each tree was transplanted to the other continent. It showed significant differences in how fast trees grew, how their roots developed, and how much carbon they used. The Canadian trees spend more energy growing fine roots and grow more slowly, both in Canada’s harsher and in Russia’s milder climate. By contrast, Russian trees would grow faster than their Canadian counterparts, both in Russia and in Canada. However, the differences in growth between trees are less if they are grown in the more moderate European climate. This shows that how trees put energy into growth of different parts of the tree has allowed them to adapt to climate patterns. Canadian trees have adapted to tolerate more stress and more severe climate conditions. 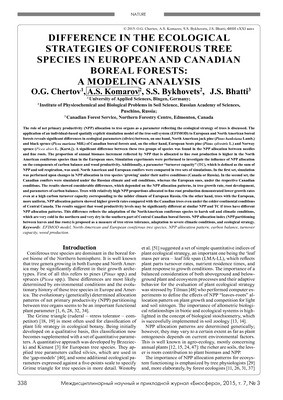