The eastern spruce budworm (Choristoneura fumiferana) is one of the most destructive forest insect pests in Canada. Little is known about its intestinal microbiota, which could play a role in digestion, immune protection, communication and/or development. The present study was designed to provide a first characterization of the effects of rearing conditions on the taxonomic diversity and structure of the C. fumiferana midgut microbiota, using a culture-independent approach. Three diets and insect sources were examined: larvae from a laboratory colony reared on a synthetic diet and field-collected larvae reared on balsam fir or black spruce foliage. Bacterial DNA from the larval midguts was extracted to amplify and sequence the V6-V8 region of the 16S rRNA gene, using the Roche 454 GS-FLX technology. Our results showed a dominance of Proteobacteria, mainly Pseudomonas spp., in the spruce budworm midgut, irrespective of treatment group. Taxonomic diversity of the midgut microbiota was greater for larvae reared on synthetic diet than for those collected and reared on host plants, a difference that is likely accounted for by several factors. A greater proportion of bacteria from the phylum Bacteroidetes in insects fed artificial diet constituted the main difference between this group and those reared on foliage; within the phylum Proteobacteria, the presence of the genus Bradyrhizobium was also unique to insects reared on artificial diet. Strikingly, a Bray-Curtis analysis showed important differences in microbial diversity among the treatment groups, pointing to the importance of diet and environment in defining the spruce budworm midgut microbiota.

The bacteria present in the spruce budworm’s intestines could play a role in its digestion, immunity and development. In this study, researchers characterized the effects of various rearing factors, including diet, on the composition of the intestinal flora of spruce budworm larvae. Here are their key findings: 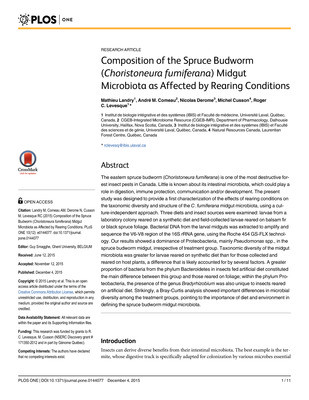