In this study, the Carbon and Nitrogen coupled Canadian Land Surface Scheme (CN-CLASS) was used to investigate the impact of climate variability, seasonal weather effects, disturbance, and CO2 fertilization effects on the historical carbon (C) dynamics of an eastern Canadian boreal forest landscape (6275 ha) from 1928 to 2008. The model was parameterized with ecological, soil texture, forest inventory and historical disturbance data and driven by hourly meteorological data constructed from the historical climate records. Before performing the landscape-level simulation, model results were evaluated against site-level eddy covariance (EC) measurements. Landscape-level simulated C fluxes showed that the forest ecosystem was a small C sink in all of the years prior to cutting and insect defoliation in 1963, which resulted in the removal of 23849 Mg C from the forest landscape. As a consequence, the study area was a large C source in 1963 (net biome productivity, NBP = −537 g C m-2yr-1). After that, the forest landscape was mainly a net annual C sink, with total ecosystem C stocks increasing from 14.8 to 16.0 kg C m-2 by 2008, during which total biomass increased from 3.1 to 4.2 kg C m-2. Analysis of landscape-level, age-detrended, simulated C fluxes for the undisturbed forest landscape from 1928 to 2002 indicated that summer temperature was the dominant control on C fluxes with higher temperature causing a much faster increase in landscape-level annual Re than that of GPP (i.e. 12.3 vs. 1.3 g C m-2yr-1 ◦C-1, respectively). Scenario analysis suggested that forest disturbances had a less profound impact on landscape-level C fluxes and stocks compared to inter-annual climate variability in this landscape. Climate sensitivity analysis revealed that landscape-level simulated C fluxes and stocks were sensitive to the change of air temperature, while only dead organic matter (DOM) and soil organic matter (SOM) were sensitive to the change of precipitation. This study will help to explore the impact of future climate change scenarios and forest management on boreal forest landscapes.

In this study, researchers assessed the impact of climate variability, seasonal temperatures, disturbances, and CO2 fertilization effects on the carbon dynamics of an eastern Canadian boreal forest region from 1928 to 2008.

Prior to 1963, the overall territory studied could be considered a small carbon sink, as it absorbed more CO2 from the atmosphere than it released into it. In 1963, the combined effects of harvesting and insect outbreaks resulted in the study area becoming a substantial carbon source. Since 1964, this forest can mainly be considered a carbon sink due to its increase in biomass.

Researchers also indicated that rising summer temperatures could affect growth negatively in undisturbed forests, an impact that would offset the positive effect of rising temperatures in the spring. 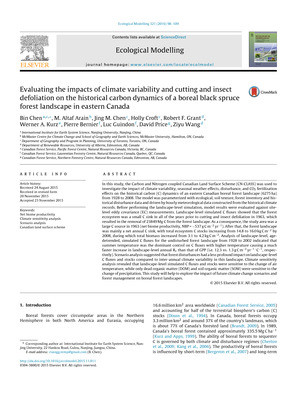