Because of global warming, warmer weather begins earlier in spring and continues later in the fall, thereby extending the season that is favourable to insect development. These seasonal changes will accelerate insect development and reproduction. Canadian Forest Service researchers observed that hemlock looper eggs laid earlier than normal are more likely to die prematurely due to prolonged exposure to warm temperatures. What about the adults? How will they react to warmer weather? Will they be more productive?

This publication describes the effect of temperature on hemlock looper reproduction. Among these effects, rising temperatures decrease the rate of successful mating as well as the percentage of fertile eggs laid by the looper.

Native to North America, the hemlock looper is considered a serious defoliator in Canada. Branching Out is a series of plain language fact sheets describing Laurentian Forestry Centre research projects. 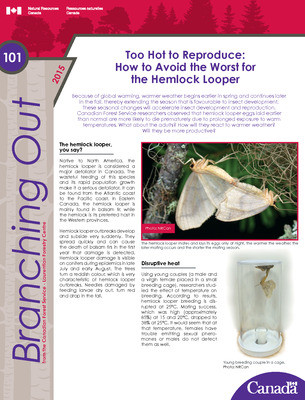