Establishment of hybrid poplar (HP) plantations has been advocated as an effective method for sequestering CO2 from the atmosphere. However, how carbon (C) cycling in HP plantations changes during stand development under different soil fertility and climatic conditions is poorly understood. We studied the dynamics of soil respiration (Rs) and its heterotrophic (Rh) and autotrophic (Ra) components and soil organic C (SOC) content in HP plantations of different stand ages established on soils with different productivity (Class 1 vs. Class 3 soils) in Alberta (AB) and Ontario (ON), Canada. The Rs was the highest for AB-Class 1 (high-productivity) soils, followed by AB-Class 3 and ON-Class 3 (low-productivity) soils. Annual Rs, Rh, and Rh/Rs decreased in the first 3 yr in AB-Class 1 and 6 yr in AB-Class 3 soils after plantation establishment and increased thereafter, but they increased with stand age after plantation establishment in ON-Class 3 soils. The SOC content in the AB-Class 1, AB-Class 3, and ON-Class 3 sites decreased in the first 3, 5, and 1.5 yr, respectively, after plantation establishment and then increased, reaching the pre-establishment level after 6, 10, and 3 yr, respectively. From this first attempt to understand C cycling across multiple sites with different soil fertility levels, we conclude that stand age and soil productivity play a significant role in affecting C cycling, and such effects should be considered in regional and global C cycling models, especially when assessing the C sequestration potential of HP plantations.

Plantations of fast-growing hybrid poplars have been promoted as a way to sequester carbon from the atmosphere. But how these trees grow in different soil and climate conditions is poorly understood. This research tried to answer the questions, what is the carbon cost with managing hybrid poplar stands intensively to produce as much biomass as possible? Can these stands be used to increase carbon sequestration on sites with different soil fertility? Stands on sites in Ontario and Alberta with different soil fertility were studied over several years. Measurements were taken to understand the dynamics of soil respiration and soil organic carbon. The research found that the age of the stand (in years) and the fertility of the soil play significant roles in how much carbon is taken up. This information is important in planning plantations, estimating the carbon sequestration of stands, and more broadly in modeling regional and global carbon cycling. 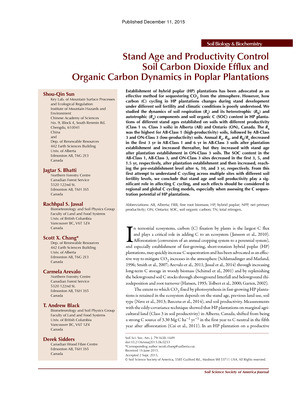