Reclaiming land after surface mining is challenging, yet it is required by environmental regulations governing Alberta’s oil sands. One of the measures used to reclaim land affected by oil sands extraction is planting trees such as the common native tree trembling aspen. New research has shown that tree seedlings given large amounts of nutrients such as nitrogen, phosphorus, potassium and sulphur during nursery production survive and grow better after planting than those produced using standard nursery techniques. To determine whether this “nutrient loading” would help in reclaiming land, we examined the growth of nutrient-loaded trembling aspen seedlings in comparison with standard seedlings planted on land being reclaimed after oil sands extraction. We tried both types of seedlings on two different types of soil and with four different fertilizer applications. The experiment showed that nutrient-loaded seedlings grew taller than standard seedlings and that growth was best on peat-based reclamation soils. Overall, nutrient-loaded seedlings grew just as well or better than standard seedlings that were fertilized. Therefore, planting nutrient-loaded seedlings may help trees grow well, with less or even no fertilizer, during land reclamation. 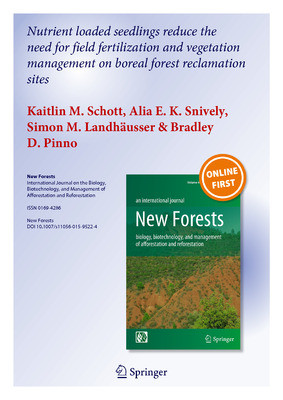