Over long time periods, paludification reduces aboveground productivity resulting in forest retrogression. Paludified forests are typified by intense accumulation of the soil organic layer and a reduction in soil temperatures and nutrient availability. En route to paludification, early successional forests experience large inputs of deadwood biomass during the senescence of the post-fire cohort, much of which may be entombed in this rapidly growing soil organic layer. Here we examined the effects of paludification across a >2000-year chronosequence of black spruce forests on wood decomposition using three complementary approaches. We (1) repeatedly measured wood density of logs through time, (2) utilize a time-series of logs that varied in time since death, and (3) estimate woody biomass at the stand level as it progresses from live trees to snags, logs and ultimately to buried or decomposed deadwood. Together these approaches demonstrated a 6–7-year delay before the onset of rapid decomposition. We also found strong evidence that paludification results in a large proportion of logs becoming buried in the soil organic layer. Stand level modeling indicates that the rates of accumulation of buried deadwood were greatest following the senescence of the post-fire cohort when both soil organic layer build-up and creation of deadwood peaked. Following this period of high deadwood creation, stands enter a retrogressive state whereby productivity continues to decline albeit more slowly. Continued losses in woody carbon biomass from trees during this retrogressive state are offset by lower wood decomposition rates and a high biomass of accumulated buried deadwood, essentially stabilizing the wood based carbon budget in these ecosystems. We recommend that partial cutting be conducted prior to or near the senescence of the post-fire cohort to improve emulation of natural forest succession in terms of both live tree and deadwood biomass. Furthermore, deadwood during this period has an extremely short residence time and the dynamics of deadwood should recover much quicker than if harvesting is conducted later in succession when there is less live tree biomass and deadwood has longer residence times.

This study demonstrates that the soil of some eastern Canadian black spruce forests has limited potential to accumulate large reserves of dead wood. These forests are subject to paludification, a natural process resulting in a continuous thickening of the soil’s organic layer.

Among other consequences, paludification reduces tree growth as the layer of organic material develops. 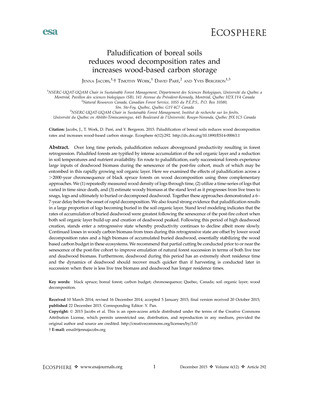