The results of this study highlight the significant potential for diversity in zones where three species of poplar (P. balsamifera, P. angustifolia and P. deltoids) crossbreed (i.e., hybridize).

This study focused on the impacts of the presence of hybrids between these three types of poplar at the stand level, as well as at the level of arthropod communities (invertebrate animals such as insects, spiders, etc.), which are highly host-specific. Genetic markers were used to categorize the trees sampled according to their degree of hybridization.

By studying arthropod communities, researchers were able to show that the more poplar species hybridize, the more they share arthropod species. Hence, the diversity of arthropods increased with the prevalence of hybrids in the stand. Furthermore, a specific species of arthropod was found exclusively on hybrid trees, thus proving that hybrids can be a source of biodiversity. 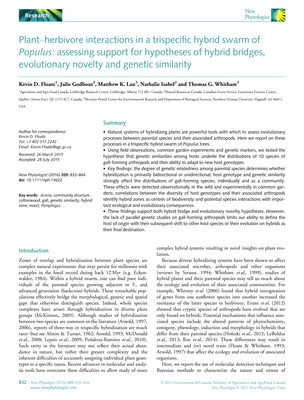