Climate change will modify forest pest outbreak characteristics, although there are disagreements regarding the specifics of these changes. A large part of this variability may be attributed to model specifications. As a case study, we developed a consensus model predicting spruce budworm (SBW, Choristoneura fumiferana [Clem.]) outbreak duration using two different predictor data sets and six different correlative methods. The model was used to project outbreak duration and the uncertainty associated with using different data sets and correlative methods (=model-specification uncertainty) for 2011–2040, 2041–2070 and 2071–2100, according to three forcing scenarios (RCP 2.6, RCP 4.5 and RCP 8.5). The consensus model showed very high explanatory power and low bias. The model projected a more important northward shift and decrease in outbreak duration under the RCP 8.5 scenario. However, variation in single-model projections increases with time, making future projections highly uncertain. Notably, the magnitude of the shifts in northward expansion, overall outbreak duration, and the patterns of outbreaks duration at the southern edge were highly variable according to the predictor dataset and correlative method used. We also demonstrated that variation in forcing scenarios contributed only slightly to the uncertainty of model projections compared with the two sources of model-specification uncertainty. Our approach helped to quantify model-specification uncertainty in future forest pest outbreak characteristics. It may contribute to sounder decision-making by acknowledging the limits of the projections and help to identify areas where model-specification uncertainty is high. As such, we further stress that this uncertainty should be strongly considered when making forest management plans, notably by adopting adaptive management strategies so as to reduce future risks.

This study shows that the predicted duration of spruce budworm outbreaks varies according to the data and statistical algorithm used.

Model-specification uncertainty should be taken into consideration when using modelling in forest management planning. 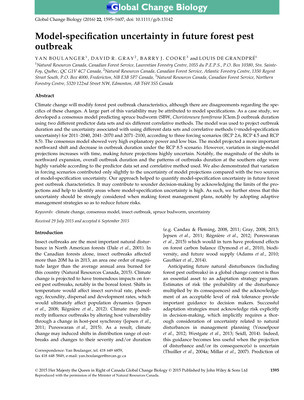