Current evidence indicate that boreal forest and tundra are exposed to warming. One of the expected results of projected climatic change on trees is a northward shift of biogeographic ranges. In boreal ecosystems, the effects of climate change are expected to be most visible at the species northern margin. Global warming should allow a relaxation of the cold related climatic constraints, as suggested by studies conducted at high latitude tree-lines. Housset et al. (submitted.) assessed the interannual and interdecadal climate variability response of the boreal gymnosperm eastern white cedar Thuja occidentalis L. (hereafter “cedar”) over a latitudinal gradient encompassing its northern marginal, discontinuous and continuous distribution areas. This study analysed a network of annually-resolved tree growth increment multi-century data combined with meteorological data covering 1953 to 2010. Cedar is an evergreen long-lived and shade-tolerant species of the eastern side of North America. The following hypothesis was tested: growth variability of cedar is positively correlated with variations of temperature and growth increases over time in link to the recent climate warming. This increase would be expected to be the greatest in the northern marginal area.

This study demonstrated that climate warming in regions located north of the 47th parallel did not promote a higher growth rate for Thuya occidentalis (commonly called white cedar), unlike what the researchers had initially thought.

By studying tree growth rings, the researchers were able to determine that white cedar growth in this region had decreased instead of increased with the increase in temperatures. This phenomenon was partly due to the increased number of summer droughts and the higher amounts of precipitation in the spring and fall attributable to climate change. These difficult conditions lead to a reduction in white cedar growth. 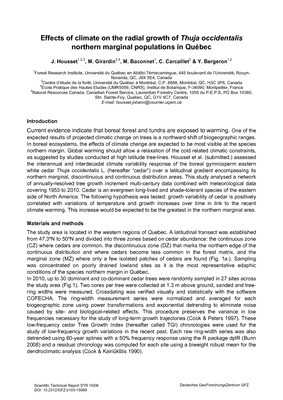