Symbiotic relationships between insects and fungi are known to cause tree mortality either through direct damage by larval feeding that can be facilitated by symbiotic fungi, or through insects vectoring pathogens directly to healthy trees. Within their native ranges, the impacts of many insect-fungus symbioses are restricted to weakened and declining trees; however, within the last century tree mortality caused by globally invasive insect–fungus associations has had a devastating impact on trees in both urban and natural forest ecosystems. Unfortunately, Canadian forests have been seriously affected by invasive organisms and an emerging threat is the expansion of a native bark beetle into the boreal forest of Alberta. This paper reviews the symbiotic relationships between selected invasive insects and pathogens that cause tree mortality within the urban and forested landscapes of Canada; it uses these case studies to illustrate potentially damaging new evolutionary trajectories.

This paper examines symbiotic relationships between insects and diseases that kill trees in urban and forested landscapes in Canada. Four case studies of symbiotic associations are provided. We discuss mountain pine beetle, brown spruce longhorn beetle, woodwasp, Dutch elm disease and the relationships these species have with various fungi. These examples show how natural migration or the introduction and establishment of exotic organisms lead to new and different ways of infecting and killing trees. 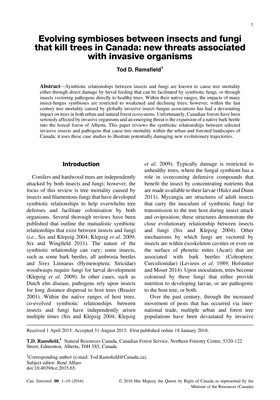