Little is known about how changing climates will affect the processes controlling fire ignition and spread. This study examines the effect of climate change on the factors that drive fire activity in a highly heterogeneous region of southcentral British Columbia. Future fire activity was evaluated using Burn-P3, a simulation model used to estimate spatial burn probability (BP) by simulating a very large number of fires. We modified the following factors in the future projections of BP: (1) fuels (vegetation), (2) ignitions (number of fires), and (3) weather (daily conditions and duration of fires). Our results showed that the future climate will increase the number of fires and fire-conducive weather, leading to widespread BP increases. However, the conversion of current forest types to vegetation that is not as flammable may partially counteract the effect of increasing fire weather severity. The top-down factors (ignitions and weather) yield future BPs that are spatially coherent with the current patterns, whereas the changes due to future vegetation are highly divergent from today’s BP. This study provides a framework for assessing the effect of specific agents of change on fire ignition and spread in landscapes with complex fire–climate–vegetation interactions. 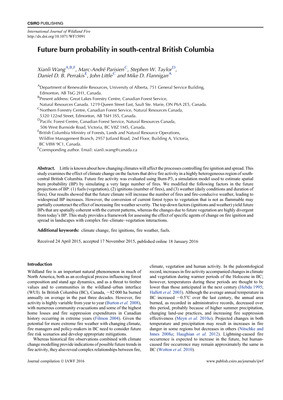