Background: Three named species of Armillaria are currently recognised as occurring in New Zealand: Armillaria novae-zelandiae (G. Stev.) Herink, A. limonea (G. Stev.) Boesew. and Armillaria hinnulea Kile & Watling. A fourth species (Armillaria sp. nov.) has been collected in New Zealand over a period of 30 years but has not yet been named.

Results: Armillaria sp. nov. is distinguished by the morphology of the fresh basidiocarp, cultural interfertility tests with other Armillaria species and DNA sequence data.

This taxonomic paper names and formally describes a new species of fungus, Armillaria aotearoa Hood & Ramsfield. This fungus was first collected in the mid 1980s in New Zealand and was recognized as a distinct species in the early 2000s, but up until now it has been unnamed and has therefore been referred to by a growing list of inadequate and sometimes misleading informal designations. This paper remedies the situation by formally naming this fungus, describing its form and structure, and confirming its authenticity as a distinct species through genetic analysis and tests demonstrating that that it does not interbreed with the other Armillaria species. This paper is important as it clarifies the taxonomic position of the fungus and its relationship to the three other species of Armillaria that are present in New Zealand. 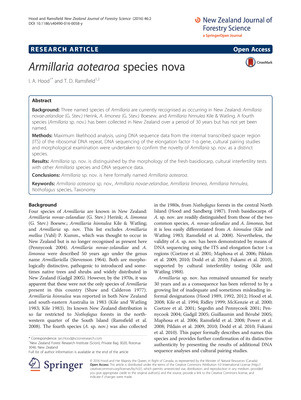