Concentrations of glyphosate observed in the environment are generally lower than those found to exert toxicity on aquatic organisms in the laboratory. Toxicity is often tested in the absence of other expected co-occurring contaminants. By examining changes in the phytoplankton and zooplankton communities of shallow, partitioned wetlands over a 5 month period, we assessed the potential for direct and indirect effects of the glyphosate-based herbicide, Roundup WeatherMax© applied at the maximum label rate, both in isolation and in a mixture with nutrients (from fertilizers). The co-application of herbicide and nutrients resulted in an immediate but transient decline in dietary quality of phytoplankton (8.3 % decline in edible carbon content/L) and zooplankton community similarity (27 % decline in similarity and loss of three taxa), whereas these effects were not evident in wetlands treated only with the herbicide. Thus, even at a worst-case exposure, this herbicide in isolation, did not produce the acutely toxic effects on plankton communities suggested by laboratory or mesocosm studies. Indirect effects of the herbicide-nutrient mixture were evident in mid-summer, when glyphosate residues were no longer detectable in surface water. Zooplankton abundance tripled, and zooplankton taxa richness increased by an average of four taxa in the herbicide and nutrient treated wetlands. The lack of significant toxicity of Roundup WeatherMax alone, as well as the observation of delayed interactive or indirect effects of the mixture of herbicide and nutrients attest to the value of manipulative field experiments as part of a comprehensive, tiered approach to risk assessments in ecotoxicology.

Glyphosate-based products are the predominant chemical herbicides used for controlling unwanted vegetation in forest and agricultural sectors, both in Canada and many other countries worldwide. Small shallow wetlands immediately adjacent to sprayed areas in either sector may receive indirect inputs of herbicide via drift or runoff with surface water. Such inputs could also include coincident introduction of major nutrients such as nitrogen and phosphorous. In this study, the potential for direct and indirect effects of the glyphosate-based herbicide, Roundup WeatherMax© on plankton populations in small wetlands was examined both alone and in combination nutrient additions. Under an experimental, extreme-worst-case scenario, short-term decline in the edible carbon in phytoplankton and a related reduction in abundance of zooplankton was observed. However, even under the worst-case exposure scenario examined in this experiment, the herbicide itself died not produce acutely toxic effects on plankton communities. Results of this study suggest that the regulated use of this glyphosate-based herbicide in accordance with its label (which prohibits intentional direct application to wetlands), is unlikely to result in serious deleterious effects on wetland plankton communities. The study also clearly exemplified the importance of examining effects of potentially concomitant stressors under field study conditions which best emulate real world receiving environments. 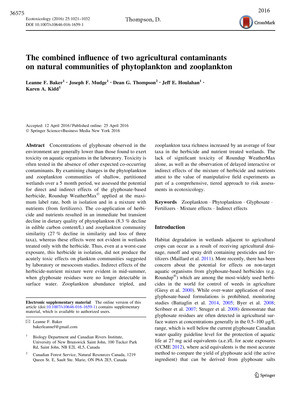